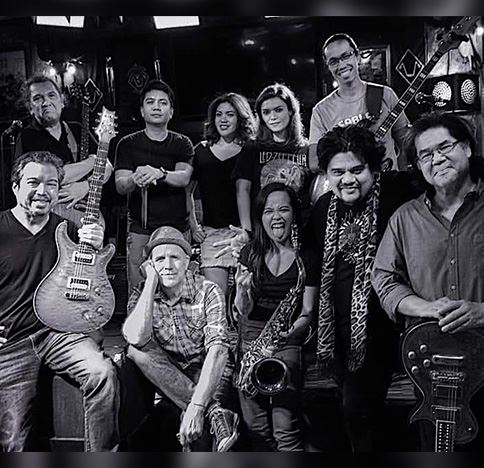 The Blue Rats are a Manila-based blues band that serves up a menu of straight-up electric blues, old-time R&B and blues-based music. Founded on the tradition of blues improvisation, the Rats mix up their sets, try not to play a song the same way twice and churn out unique versions of the songs they cover.The fact that some of the band’s members rotate on any given night assures a fresh sound, provides a hint of danger, and moves the musical goalposts up and down the field from one performance to another.

Over the years, many talented musicians have been regular members of the band — about 41 players as of last count — something made possible because of the improvisational nature of the music. Even more remarkable is is the range of musicians that have jammed, performed onstage, or done time in the studio with the band — a virtual who’s who of Pinoy blues, rock and jazz: Mike Hanopol and Joey ‘Pepe’ Smith (Juan de la Cruz), Sampaguita, Jun Lopito (Cociojam, Bodhisattvas), Chikoy Pura and Nitoy Adriano (the Jerks), Dondi Ledesma (Wally Gonzales band), Miyakee de Castro (Sampaguita), Binky Lampano, Edwin Vergara, Tom Colvin, Edmund ‘Bosyo’ Fortuno, Norman Belardo (Advent Call) and many more.

Twenty two years later, close to a 200-song menu, an ever-evolving roster, and an unwavering commitment to fly the blues flag, the Rats continue to plug in at venues in and around Manila.

Subscribe to our newsletter to get promo and event updates!

0
0
Your Cart
Your cart is empty

Reservations are not confirmed until 1) acknowledged by Handlebar management as a pending booking, and 2) payment for the reservation is made.

Reservation payments are consumable, except during designated major events. During these events, a portion will be consumable depending on the event.